The design of the CamdenBoss Cube Raspberry Pi 4 case is certainly very different from the usual small rectangular cases typically used. When I first saw it, it reminded me of the Borg Cube ship from Star Trek. Though the intricate pipes of the Borg ship are clearly for a practical reason, the CamdenBoss Cube appears to be purely aesthetic.

The case feels solid when fully assembled. When in two pieces the plastic feels rigid with nicely rounded edges.

Testing is once again performed using Stressberry in a series of 1hour tests at 25%, 50%, 75% and 100% load. During testing the Pi is temperature is monitored, along with the ambient temperature. In addition, the core clock speed of the Raspberry Pi 4 is tracked to measure any impact of thermal throttling.

The extra volume of air in the Cube case does appear to help to avoid thermal throttling until the load reached 75% where the Pi starts to throttle regularly to 1000MHz. The full load 4 core test sees it dropping to 1000MHz and throttling further to 750MHz frequently with one measurement dropping to 600MHz whilst under load.

This Raspberry Pi 4 case is certainly more about a design aesthetic than offering additional functionality. I’d have liked to have seen the space used to provide more functionality. For example:

That being said, the large space in this well-constructed case could provide a starting point for Pi-based projects.

CamdenBoss provide custom print and cutting services, so this case is more a foundation for a prototype. Perhaps where makers are happy to drill and cut the case to tailor it to their needs initially, before finalising a design in collaboration with CamdenBoss. It would be nice to see some examples of custom versions of this case on their website, to get a better feel for what is possible and practical 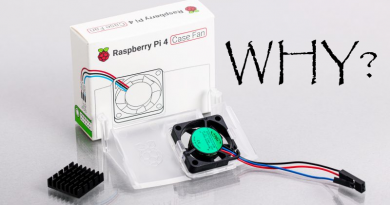