I was contacted by Abe McKay, Mechanical Engineer at 219 Design to see if I was interested in testing their case which they’d designed for their own internal use, as covered in Abe’s blog post. Not being in the same country and without my own 3D printer meant Abe had to figure out a cost-effective method to get the printed design to me. They opted to have the case printed by 3DPrint UK, however, they use nylon filament whereas to date Abe has printed their design using PLA. So there was a degree of uncertainty around the outcome.

In addition to the 3D printed case, the 219 Design team supplied a suitable heatsink and fan kit, which comprised:

To be fair to Abe and 219 Design team, they used an untested supplier and printing material for the case they created for me to test. As such some of the problems I cover here may not be applicable to printing in other materials, or with different suppliers. Without my own 3D printer, it’s not possible to experiment and iterate the design.

If anyone wants to donate a 3D printer, please get in touch.

As I have a backlog of items to review and my own projects, I wasn’t able to do my full round of testing when the case first arrived. However, it was useful to share my first impressions with Abe and the 219 Design team and get some feedback from them.

In terms of the overall appearance, the 219 Design case is very professional looking with only a small number of flaws that it would be good to see addressed. The case feels solid and well constructed, a step up in quality compared to the previously tested John Sinclair 3D printed case.

With the lid on the case, access to the GPIO header and other connections isn’t possible, which may be seen as a significant limitation. However, the 219 Design team have thought of this, the case lid can actually be fitted at 2 levels. If the lid is removed, rotated 180° then re-installed it creates a 1mm gap at various points around the edge of the case, sufficient to feed out GPIO wires and small ribbon cables to various accessories. Note that you can’t fit a 40 wire ribbon cable through, as some supports along the side that restrict access. The 219 Design team call this “Development Mode” compared to the regular “Desktop Mode”, nice touch.

I thought it would be interesting to see how the 219 Design case performed in a passive cooling scenario given there is some ventilation provided on the sides and top of the case. This was followed by tests with the fan installed and powered by the Raspberry Pi GPIO header, using either 5V or 3.3v power.

Testing is once again performed using my fork of Stressberry (though most of my changes have been accepted upstream, I have some additional helper scripts to aid my testing and analysis.) Tests are conducted for 1hr against 1, 2, 3 then all 4 cores of the Raspberry Pi 4.

With just passive cooling throttling only occurs during the 4 core stress test, frequently dropping from 1500MHz to 1000MHz. With a peak temperature of 84°C, it doesn’t do well compared to the passive optimised cases like the Argon40 Neo (~74°C) or the Armour Radiator (~63°C).

With active cooling provided by the 30mm fan either running at 5V or 3.3V, the Raspberry Pi is a long way from thermal throttling. The 5V is clearly more effective especially as load increases, seeing 12°C lower temperatures at peak load.

Comparing the 219 Design case fanless, with the fan running at 3.3V and at 5V, whilst accounting for variation in the ambient temperature we can see how much of an impact active cooling provides.

Evaluating how the 219 Design case performs against other options leads to the obvious comparison points with a bare Raspberry Pi 4 and the aforementioned John Sinclair 3D printed case. I used the Same Raspberry Pi 4 in the JS 3D case, so the heatsinks are still installed on all the components, with a 40mm Noctua Fan providing the cooling. The Noctua was the quietest in the 40mm fan test, though louder fans can provide increased cooling. As above the temperatures take account for variation in ambient temperature, and present the results as the amount above the measured ambient temperature.

The RPi4 Bareboard doesn’t include any heatsinks, but not being enclosed at all means it outperforms the enclosed fanless 219 Design option. As expected as soon as active cooling is added, the 219 Design and JS3D provide a significant improvement in cooling performance. The JS3D slightly outperforms the 219 Design at 3.3V, most likely due to an overall less restrictive airflow design. At 5V the two offerings are close to identical in terms of thermal performance.

I’m unable to perform accurate noise measurement at the moment. Subjectively the 219 Design case with the fan running at 3.3V is near silent. At 5V it becomes more audible but not to an offensive level. The 40mm Noctua in the JS3D case running at 5V is quieter than the 30mm Pi-Cool fan at the same voltage. However, compared to some of the other 40mm fans at 5V the Pi-Cool fan is noticeably quieter. 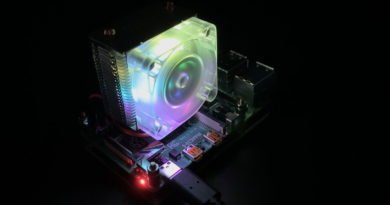